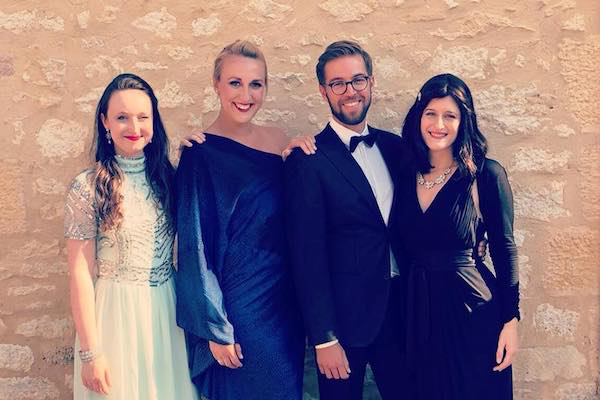 We are four young artists on the cusp of our professional careers.  We were all offered a place on a French Baroque Festival academy in August (Festival du Perigord Noir) where we were given the opportunity to study and interpret our roles (Bellezza, Piacere, Disinganno and Tempo).  As this was primarily a training programme, each role was shared with 3 other singers, and so we are yet to perform these fantastic roles in their entirety.

To perform Handel's first oratorio  - 'Il trionfo del tempo e del disinganno'  - to a UK audience, and create for ourselves the opportunity to perform each of our respective complete roles. The performance is booked for St Anne's Church, Lewes, 7.30pm on the 6th October 2018.

What do we need?

We'd love your attendance more than anything, but if this is not possible, we would be very grateful for a donation! Money secured from generous donations and bursaries, such as that of Audition Oracle, will go towards our costs, as it would be fantastic to be able to raise as much of this as possible, so that we can go into the concert and focus on the music, rather than the maths.

Handel's first oratorio, 'Il trionfo del tempo e del disinganno' (The Triumph of Time and Disenchantment) had its premiere in Rome in 1707.  The plot surrounds the conflict between earthly pleasures and divine grace.

Bellezza (Beauty) knows that one day her beauty will fade, but Piacere (Pleasure) tries to convince her that this is not the case, and in doing so, promises her eternal beauty.  Tempo (Time) and Disinganno (Disenchantment) do their best to warn Belleza that like a flower, beauty and it's charms will not last.  Bellezza eventually discovers the truth, and frees herself from vanity, and in doing so, turns her heart to God.

Susanna MacRae graduated from the Royal College of Music, London, where she studied with Jeffrey Stewart (Vocal Studies) and Nigel Clayton (Piano). Currently, she studies in London with Sheila Barnes and Jeremy Silver.

This year she has competed as a finalist at The John Kerr Award for English Song, Cheltenham Baroque Singing Competition and in September has been selected as a semi-finalist in The Froville International Voice Competition in France.  Solo highlights include appearing as soprano soloist for numerous choral societies across south-west England and she regularly appears on the recital platform around London and the South, collaborating with Guy Murgatroyd (Piano) and Aidan Phillips (Harpsichord). Susanna is grateful for the generous support of The Nicholas Boas Charitable Trust in supporting her studies.

French bi-lingual Thalie trained with English National Opera on their distinguished Opera Works programme (2014/15) and was a 2016 Britten-Pears Young Artist where she performed Bach Cantatas under the guidance of tenor Mark Padmore. A finalist of the 2017 London Song Festival Lieder competition, Thalie was personally selected by Malcolm Martineau to take part in his residential masterclass series in Crear, Scotland, in January 2018.  She is an alumna of the Royal Welsh College of Music and Drama.
This season Thalie will sing the role of Piacere IL TRIONFO DEL TEMPO E DEL DISINGANNO (Le Festival de musique du Périgord Noir), Prue THE DANCING MASTER (The Malcolm Arnold Festival) and chorus for Longborough Festival Opera in their production of Wagner's DER FLIEGENDE HOLLANDER.

Clara read Social and Political Sciences at Clare College, Cambridge, before studying at the Guildhall School of Music and Drama, finishing in 2018.
Clara’s operatic roles include Junon (Actéon), Mercedes (Carmen), Pitti-Sing (The Mikado), Sorceress (Dido and Aeneas), Dame Carruthers (The Yeomen of the Guard), Third Lady (The Magic Flute), Zita (Gianni Schicchi), and La Zelatrice (Suor Angelica). She was a soloist in Stockhausen’s Mittwoch aus Licht for Birmingham Opera Company, and has performed roles at Buxton Opera House and the Arcola Theatre for London’s Grimeborn Festival.

In concert, she has performed Berio’s Coro with the Lucerne Festival Academy Chorus under Sir Simon Rattle, and with the Norwegian Soloists Choir, as well as Vivaldi’s Gloria at the Purcell Room, Messiah at Cadogan Hall, Haydn’s Nelson Mass at St Martin-in-the-Fields, Stradella’s San Giovanni Battista (title role) for Théâtre Roger Barat, and Brahms and Schubert songs with The Prince Consort/Side by Side at Wigmore Hall. She has featured as a soloist for the Armonico Consort and in broadcast for BBC World Service Radio.

Accompanied by The Baroque Collective (leader Alison Bury) and conducted by John Hancorn. 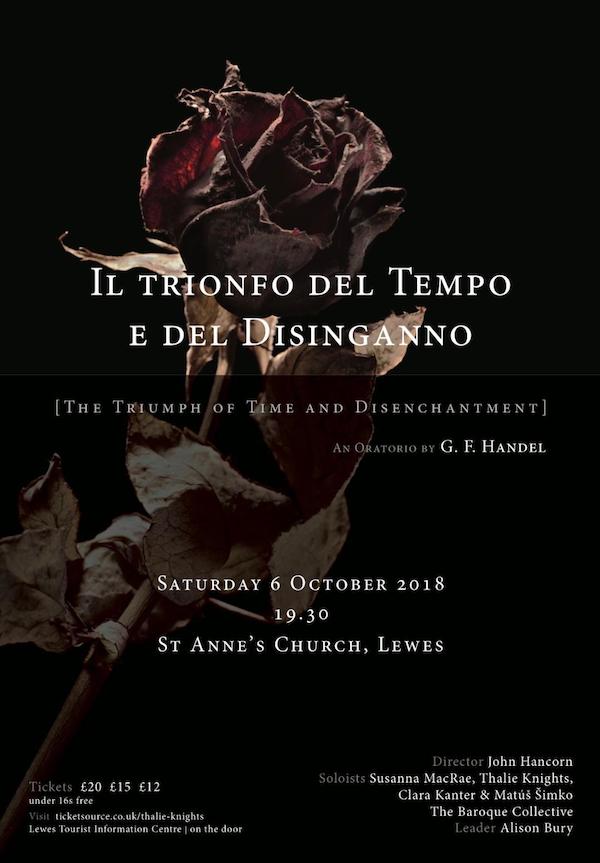