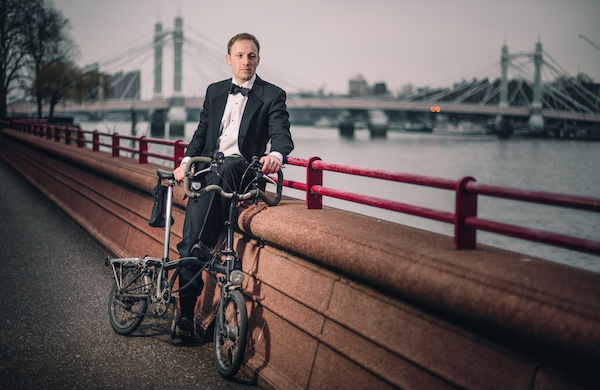 Our final award for this month goes to baritone David Jones to help realise his project Song Cycle. This fundraising initiative will raise money for the incredible Live Music Now scheme.

Live Music Now is a UK-wide initiative, created by Yehudi Menuhin and Ian Stoutzker in 1977. Every year, their musicians deliver thousands of interactive music programmes in care homes and hospitals, and a range of community and healthcare settings. They also work in special schools, where music can make a huge difference to the lives of children and their families. Their specialist support and training provides young musicians with skills and employment at the start of their professional careers, across all genres of music.

First dreamed up by baritone David Jones while still a student, cycling through the streets of London, Song Cycle is a musical pilgrimage that marks the sixtieth anniversary of the death of Ralph Vaughan Williams. Travelling a thousand miles from John O' Groats to Land's End on his Brompton folding bike, David will give performances of Vaughan Williams's Songs of Travel along the way, seeking an ever deeper connection with the songs over the course of his journey.
He will pass through the Scottish landscapes that inspired Robert Louis Stevenson, the poet of Songs of Travel, as well as the English ones that were so dear to Vaughan Williams himself. In homage to the composer's expeditions into the countryside to collect folksongs, David will pair the Songs of Travel with a selection of folksongs from along his chosen route.
Song Cycle is raising money for the vital work of Yehudi Menuhin's charity Live Music Now, which works to bring live music to people that otherwise would not have access to it, with a focus on older people in residential homes and those living with a dementia.
Song Cycle will take place from 18 May - 17 June. For information see www.song-cycle.com and @davidjonesbari

A prizewinner in the 2015 AESS Patricia Routledge English Song Competition, David Jones is equally at home in song, oratorio and opera. He has a particular interest in new music, and has given premieres of works by Nick Bicât, Stephen Deazley, Louis Mander and Josh Spear.
Recent highlights have included Papageno in Die Zauberflöte and Guglielmo in Così fan tutte for the Lyric Opera Studio Weimar and Sharpless in Madam Butterfly for the King’s Head Theatre. He toured the UK as part of Joshua Sofaer’s innovative Opera Helps project and is a soloist on Yehudi Menuhin’s Live Music Now scheme.
With Teatime Opera he has broken new ground in Unknowing, an ambitious staged interweaving of Dichterliebe and Frauenliebe und -Leben in a new English translation by David Parry, which will receive more performances in late 2016. His recitals have included explorations of major song cycles by Finzi, Vaughan Williams and Schumann, alongside lesser-known works by Bliss and Sullivan, and he enjoys a fruitful ongoing collaboration with Cantata Dramatica, with whom he has given the first performances of four substantial works.
On the opera stage he appeared as Ko-Ko in an acclaimed production of The Mikado with Co-Opera Co., in which "his deadpan sense of humour and immaculate timing proved irresistible" (Opera magazine) and his little list was "brilliantly delivered with hangdog deadpan" (Opera Now).
Other operatic roles have included Jesus in Jonathan Harvey's Passion and Resurrection (Voices of London Festival), Edward VIII in the premiere of Josh Spear's That Woman (Tête-à-Tête Festival), Pritschitsch in The Merry Widow (Opera Danube) and Jamie in The Sleeper (world premiere with Welsh National Youth Opera). For Oxford Chamber Theatre he played Ariel in The Tempest and the title role in Hamlet.