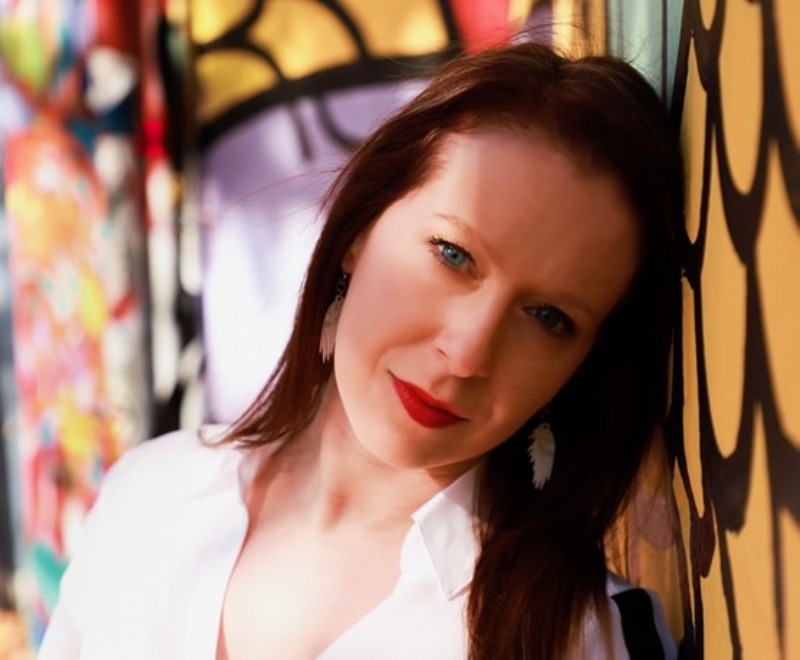 "Her voice is kind of the perfect voice, in my estimation. Not overly operatic (warble), focused pitch, light but serious, and a gorgeous tone with many colors in it." -Daniel Felsenfeld, composer, NYC

International "ultra-soprano" (Second Inversion, WA, USA) and "new music rising star" (The Stranger, WA, USA) Emily Thorner is rapidly making her mark as a soloist in contemporary chamber ensembles, orchestras, and modern operas. Known for her command of stratospheric high notes, Ms. Thorner is highly sought-after for world premieres due to her unusual range and fearless virtuosity. Recent performances have included: Acht Brücken festival in Cologne (on WDR radio), Britten-Pears Young Artist Programme at Snape Maltings in the UK with Jessica Cottis and Claire Booth, the Donaueschinger Musiktage with Deutsche Kammerchor, Seattle, USA, singing a world premiere with Kin of the Moon, Gladbeck, Germany performing with the Duisberg Philharmonic and Chorwerk Ruhr for the Ruhrtiennale festival, and in Italy, singing as the Soprano Soloist for "Hotel Paradiso" by Benedict Mason with TransArt under the baton of Clement Power.

Additionally, she has also performed in Boston and New York for a double performance of Rumpelstiltskin with Guerilla Opera as The Miller, which has been recorded for Navona Records, the classical label of PARMA records, and Sisa in Noli Me Tangere, which featured her in a mad scene in the Tagalog language. In 2018-2020, she will have made appearances in the United States (Boston, New York, Ohio, North Carolina, Seattle), England, Germany, Italy, The Netherlands, and Austria. Ms. Thorner recently was one of only two vocalists during the Bang on a Can New Music Festival and sang at Impuls Festival in Graz, Austria. She is the second-prize winner of The 2019 North International Music Competition and has been invited to sing in the Aldeburgh Festival (UK) in 2020 as well as SPLICE festival 3 (USA). She was also the first soprano in twenty years to take part in the new music course of the Britten-Pears Young Artist Programme and her entrepreneurial spirit has led her to put together STATE OF BEING, a world tour written for her voice and electronics beginning late 2020. Upcoming world premieres written for her voice include collaborations with composers Julianna Hall (USA), Max Hundelshausen (DE), Alex Mills (UK), James Joslin (UK), Rob Laidlow (UK), Martyna Kosecka (Norway/Poland), Kaley Lane Eaton (USA), Anthony R. Green (USA/NL), and Rita Ueda (Canada).

Ms. Thorner released her first album on Itunes with ensemble Kin of the Moon for "FUNERAL SENTENCES FOR DAMAGED CELLS" in 2020. On the radio and in the media, she and has been heard on Wartburg Radio with choir Canto Armonico, MDR in Dresden performing an excerpt of Die Entführung aus dem Serail by Mozart, icareifyoulisten.com (USA) and had an article written about her during Bang on a Can in newsounds.org (USA). A featured soloist with Sound Icon in Boston, she recorded the US premiere of Wolfgang Rihm's Frage, known for its impossibly high tessitura of over twenty-two high F's and beyond. Past collaborations with contemporary chamber ensembles include: Hub New Music, Boston Musica Viva, and Sound Energy at the New Music Gathering as well as performances with recording choir Vox Futura, the Grammy award-winning Hans Zimmer International Tour, and New Hampshire Music Festival.

Any message that you send here will be checked by Audition Oracle for suitability (to filter out spam), and then forwarded to Emily Thorner.