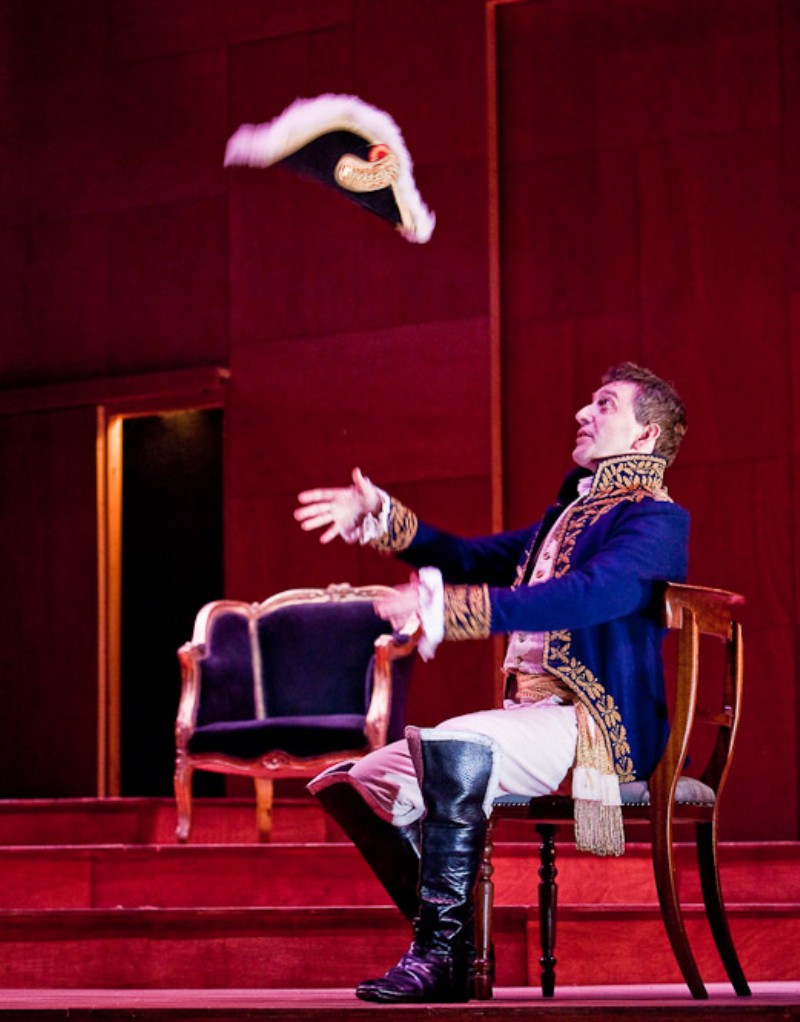 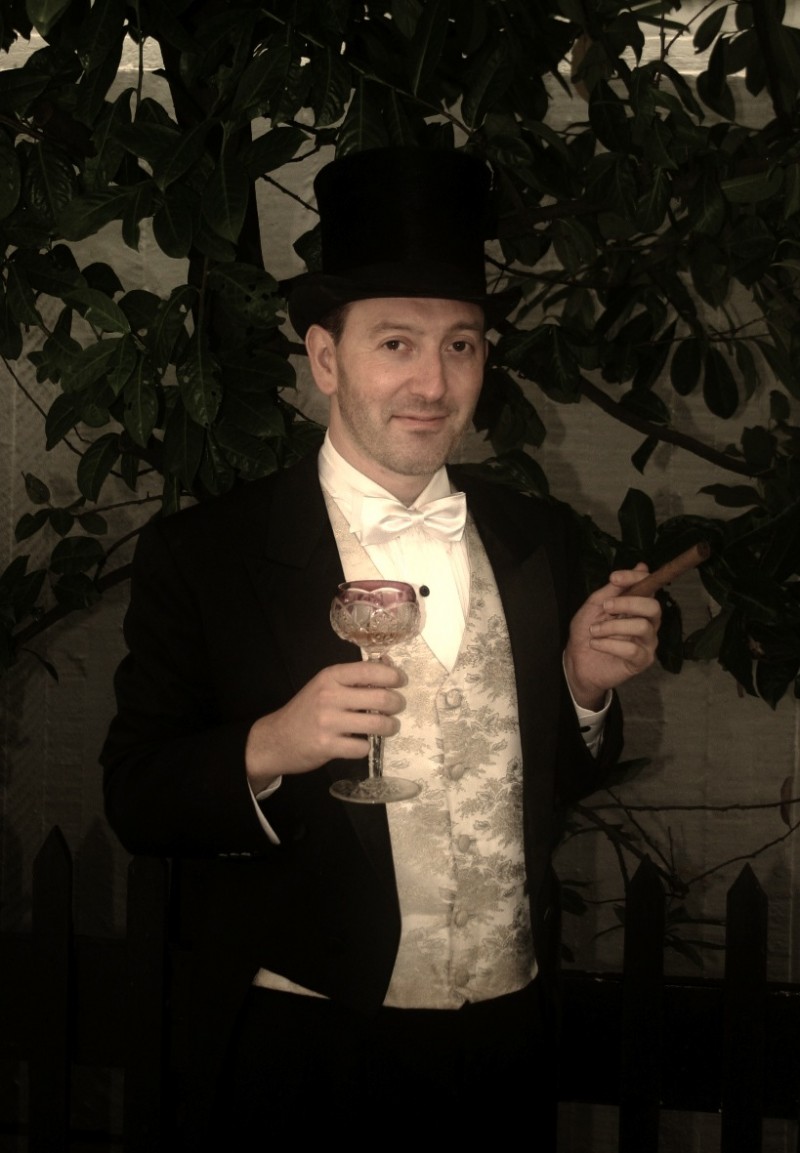 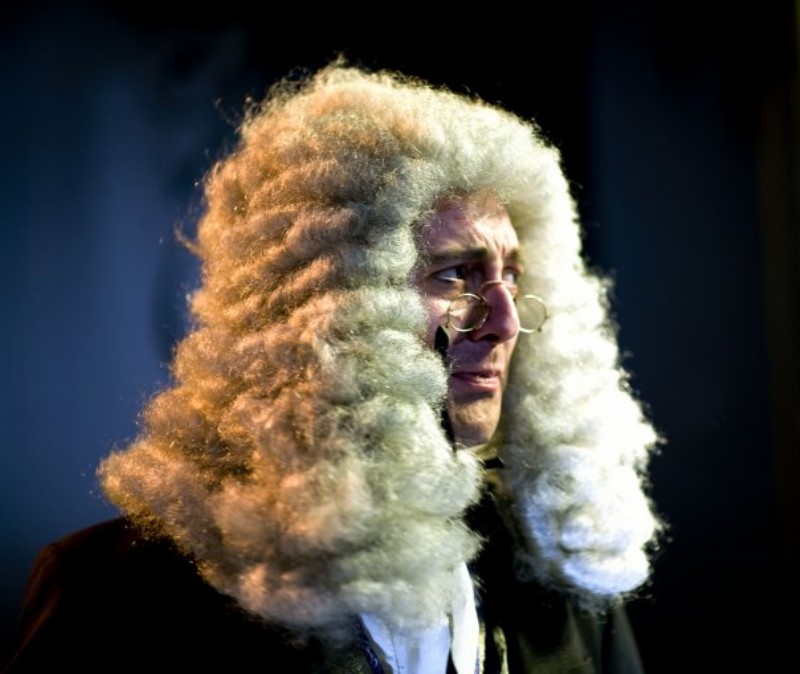 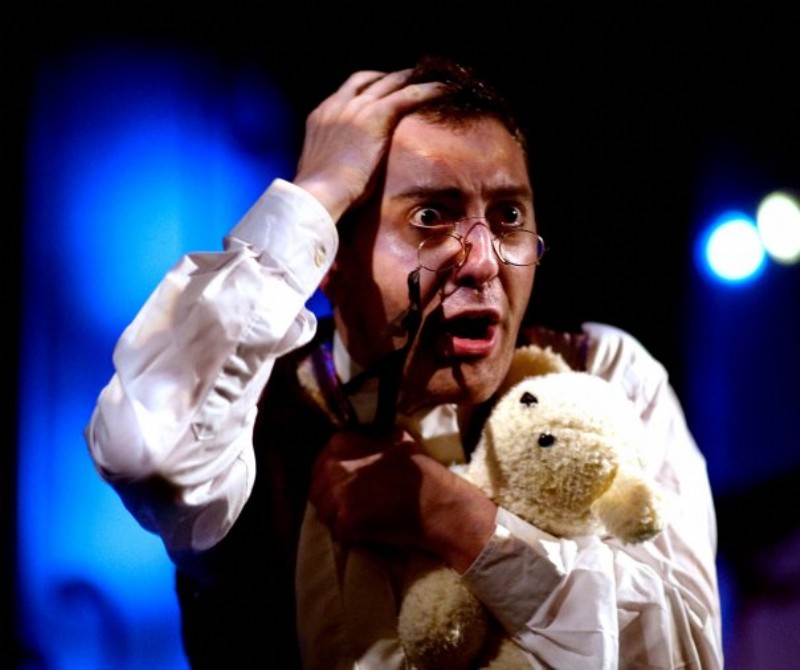 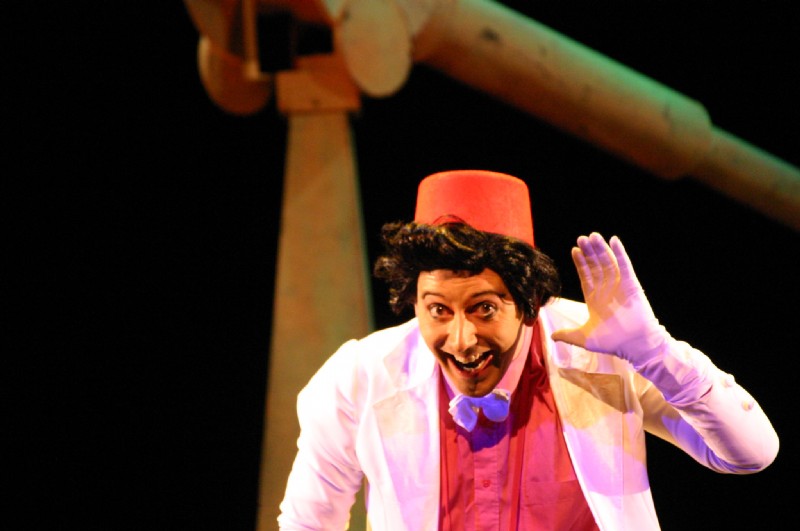 Papageno in The Magic Flute 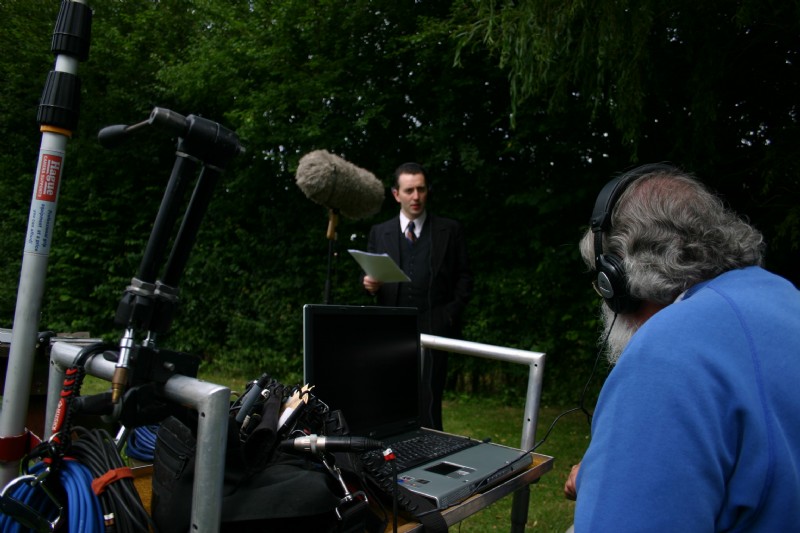 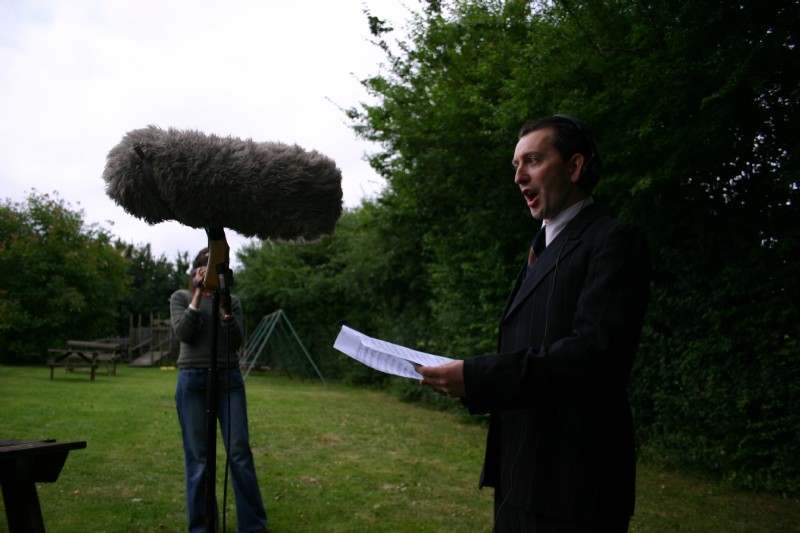 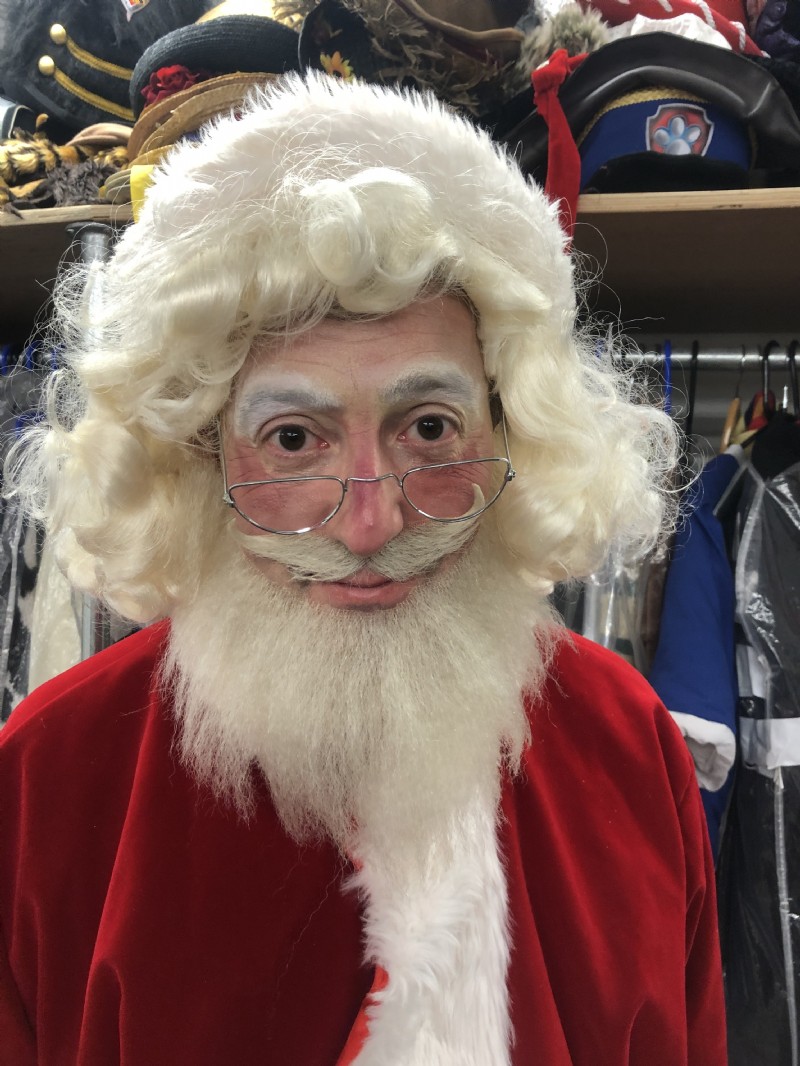 Giles Davies studied at the Purcell School of Music, and on a scholarship at the RCM with Norman Bailey. He was a prize-winner in the 1993 Overseas League, the 1994 Tillett Trust, and the 1999 AESS.
He has recorded for the BBC (Dichterliebe at the Wigmore Hall), and appeared with the late Richard Hickox (A Sea Symphony/Dido and Aeneas) Philip Pickett (Monteverdi’s Vespers) Trevor Pinnock (Handel’s Apollo and Dafne); Mahler’s Kindertotenlieder (Ballet Rambert) and London Mozart Players. As a young actor Giles appeared as Puck in Britten’s A Midsummer Night’s Dream at the ROH, and since then his many operatic roles have included the title role in ‘The Piano Tuner’ (Osborne/Holden), for MTW, receiving acclaim in the national press, (‘commanding’, ‘outstanding’, ‘sympathetic’, ‘rich and smooth toned’), and an onscreen appearance as John Goss in the film Peter Warlock, Some Little Joy. (Signum DVD). His song album, Gossiana, dubbed ‘a mighty labour of love’ by International Record Review, is on Divine Art Records, and featured in the I-Tunes Traditional Christmas Chart in 2009. He also appears on the new recording of Edward German's Tom Jones (Naxos), and has collaborated on the albums Illumination and Temptation with the Mediaeval Baebes.
Operatic roles include Figaro in Rossini's Barber of Seville (Scottish Opera), English Pocket Opera), Dr Kolenaty in Janacek's Makropoulos Case (Scottish Opera), Schaunard in La Boheme, (Castleward/ Holland Park Opera/ Scottish Opera), Falke in Die Fledermaus (Crystal Clear and Carl Rosa), Figaro in Mozart's Marriage of Figaro (Holland Park Opera), Besso in Cavalli's Giasone, (Megaron, Athens), Dmitri in the European Premiere of Richard Wargo's The Music Shop, (Jigsaw Music Theatre), Ferryman/
Ananias/ Father in the Church Parables of Britten, (Opera du Rhin, Strasbourg), Love's Labyrinth with Opera Restor'd, Pish Tush in The Mikado, Strephon in Iolanthe and Sir Richard in Yeomen of the Guard (Carl Rosa Opera).
Other engagements have included Ariodates in Handel's Xerxes (OTC), Dandini in Rossini's Cinderella, (Epoc), Giacinto in Galuppi's comedy Il mondo alla roversa, (NCO), Lord Chancellor in Iolanthe (Buxton Opera House), Vaughan Williams' Five Mystical Songs, and a recital for the Franz Schubert Society (London). Concerts have included Mozart's C Minor Mass, Handel's Italian Acis, Galatea and Polyphemus, Haydn's The Creation, Purcell's Dido and Aeneas, and Viscomte Cascada in Lehar’s The Merry Widow (Scottish Opera).
2010 and 2011 engagements included Pish-Tush in The Mikado for Raymond Gubbay across the UK at the Barbican, RFH, Symphony Hall and Bridgewater Halls, Strephon in Iolanthe (Buxton), Papageno in The Magic Flute for Opera Brava, and Cavalli’s Erismena at New College, Oxford.
2012 engagements include Bach’s St John Passion and a Gala concert of Baroque music for the 25th Anniversary of Suffolk Villages Festival, Baron Douphol in Verdi’s La Traviata (Garden Opera) and an appearance on ITV’S You Cannot be Serious.
A CD of songs by Viardot-Garcia will be released alongside the book Years of Grace, (Cambridge Scholars Press) for which he also contributed the Preface.
He has also completed a new audiobook including rare archival tracks from remastered 78 records, Cockroaches and Diamonds by John Goss. (www.cockroachesanddiamonds.co.uk)
2014 engagements have included Bach’s B Minor Mass and Handel’s Messiah (SVF). He has also appeared as Colonel Calverley in Patience at the King’s Head Theatre in Charles Court Opera’s acclaimed new production, and as Cecil Graham in Oscar Wilde’s Lady Windermere’s Fan at the Tabard Theatre, London, including onstage cabaret as singer, actor and pianist.
2015 engagements included the role of Saul in Charpentier’s David et
Jonathas at the Suffolk Villages Festival and Markar in the UK premiere of Tchoukhadian’s 1875 Opera Buffa Garine at the Arcola Theatre. 2016-17 engagements have included the role of Seneca in Monteverdi’s L’Incoronazione di Poppea at Suffolk Villages Festival, Bach Cantatas, Vaughan Williams’s Carol Fantasia (St Alban’s), Venetian Vespers by Monteverdi and his contemporaries (Cambridge), and a Lieder recital for the Franz Schubert Society. (London)
In 2018 he appeared as Maximillian and other character roles in Leonard Bernstein's 'Candide' with Surrey Opera at the MinackTheatre, Cornwall.
He also appeared as Don Bartolo in Mozart's 'Le Nozze di Figaro' at Theatre Royal Portsmouth with Beechwood Opera. He returns to Surrey Opera as the Judge in Gilbert and Sullivan's Operetta 'Trial by Jury'.
2019 engagements have included songs by Peter Warlock at the Guard's Chapel, London, accompanied by the Countess of Wessex's Orchestra. He has also appeared in the role of Don Bartolo in Rossini's 'Il Barbiere di Siviglia' with the Scherzo Ensemble. Recent engagements have included Doctor Spinelloccio and Amantio di Nicolao in Puccini's One Act Operatic Comedy 'Gianni Schicchi' for Lunchbreak Opera, including performances at the Bridewell Theatre and King's Head Theatre, London.
In Autumn 2021 he will appear in the premiere of the new Opera 'Madeleine', (Hackbridge Johnson / Jonathan Butcher) with Surrey Opera. His satirical songs on the subjects of Covid 19 and Brexit, written in 2020 and recorded during 'Lockdown', can be heard on Soundcloud.
Giles features on the new Mediaeval Baebes (UK) album 'Prayers of the Rosary', released for Christmas, 2020, which has been featured on BBC Radio 6. Engagements for 2022 will include Leporello in Mozart's 'Don Giovanni' for Surrey Opera (London and Cornwall).

Any message that you send here will be checked by Audition Oracle for suitability (to filter out spam), and then forwarded to Giles Davies.