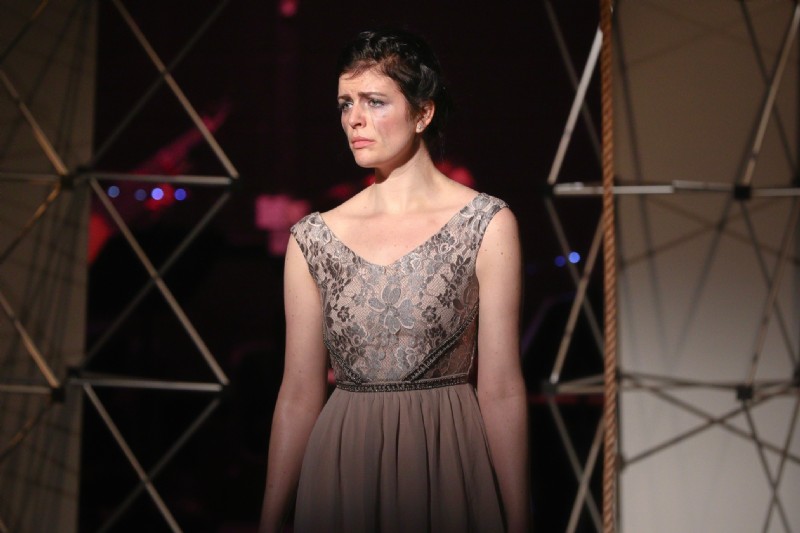 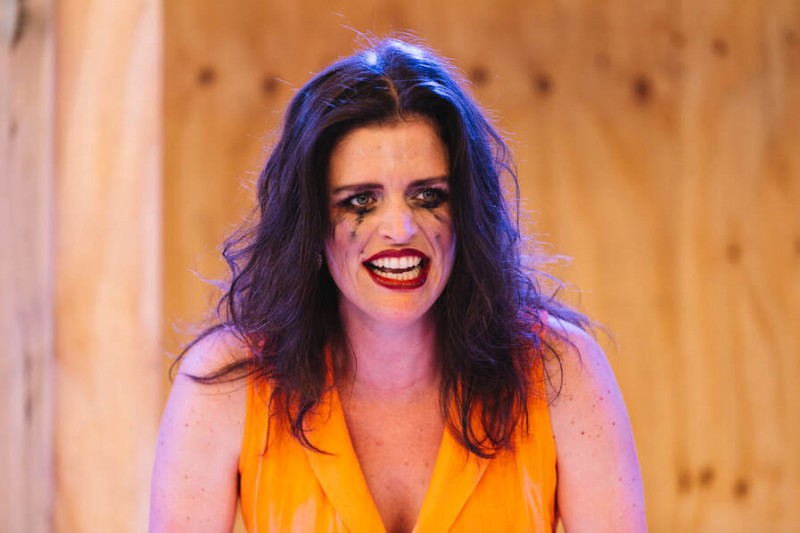 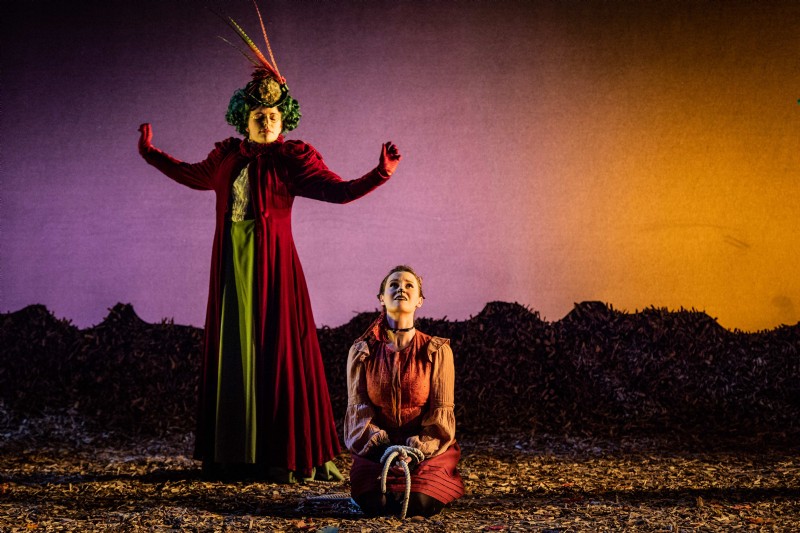 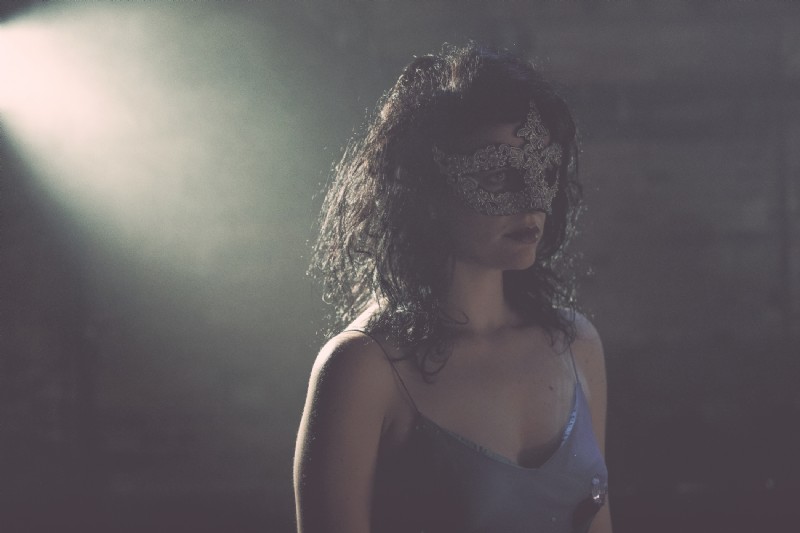 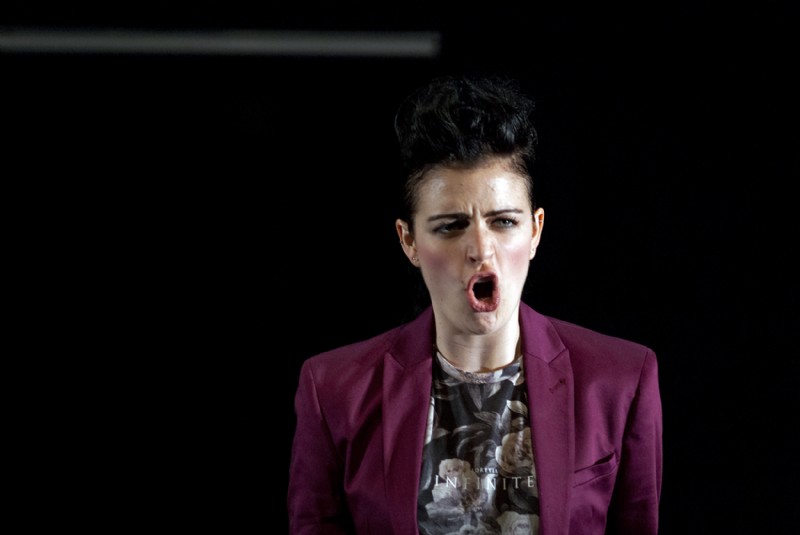 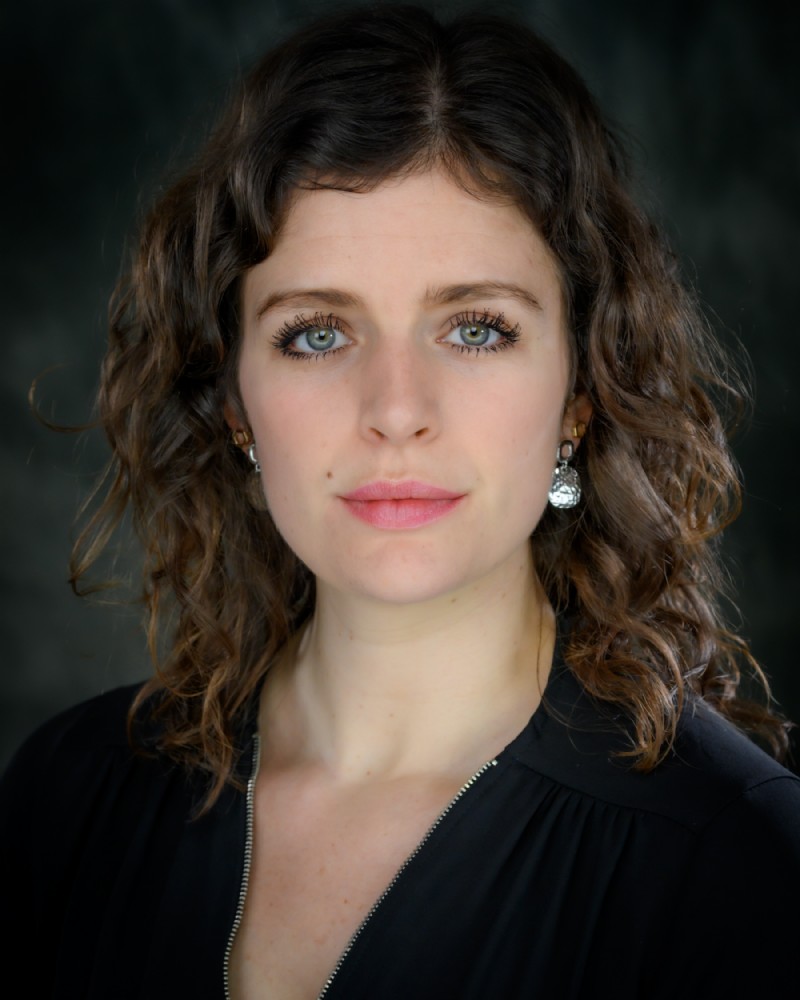 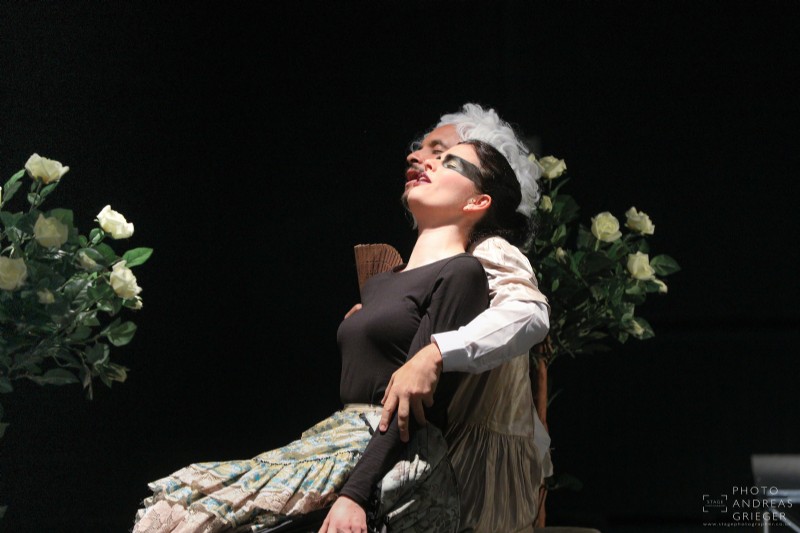 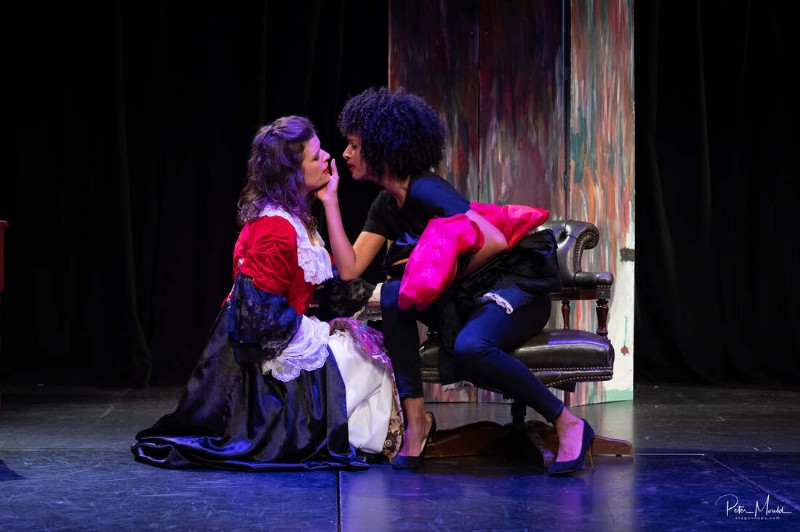 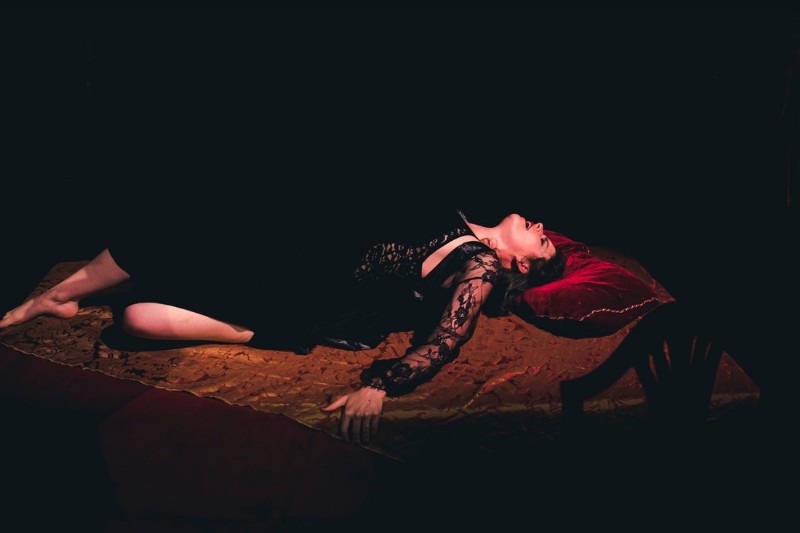 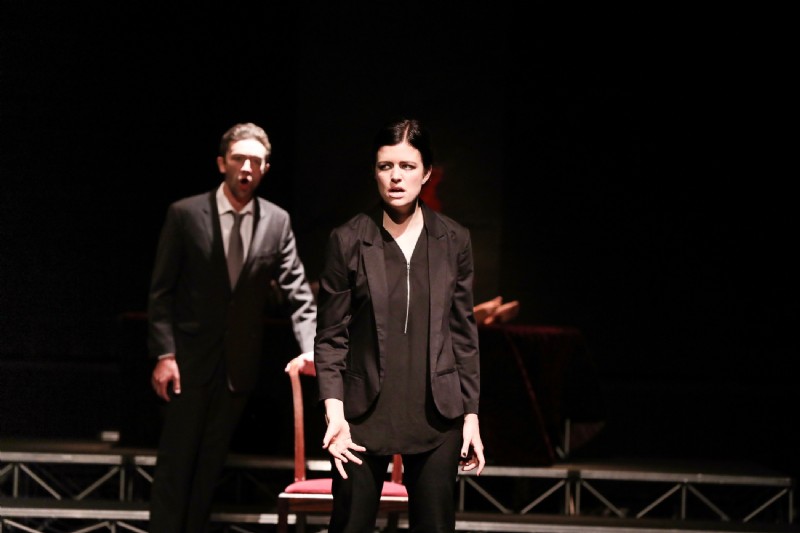 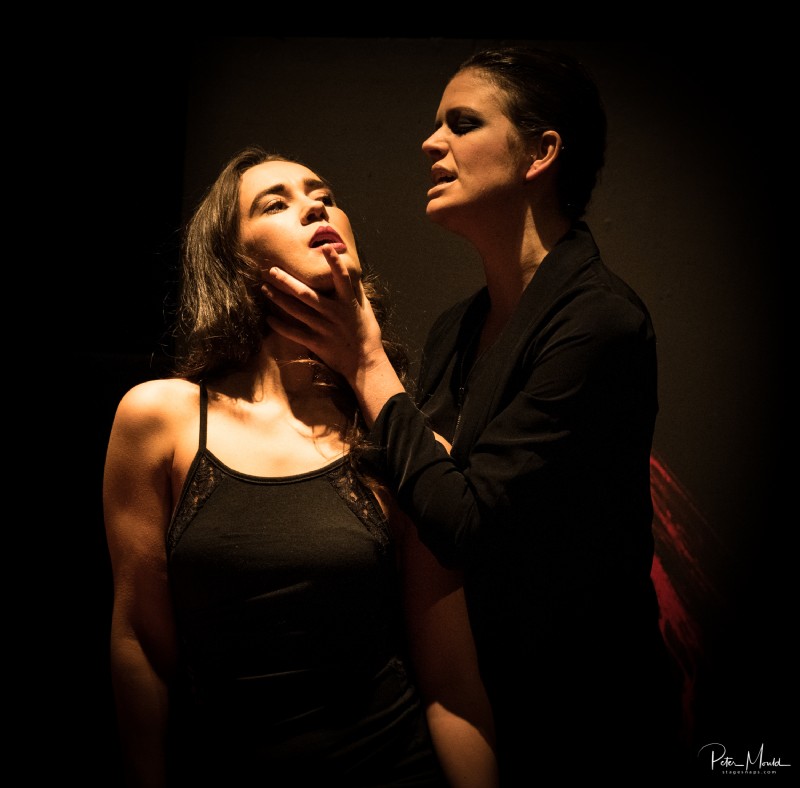 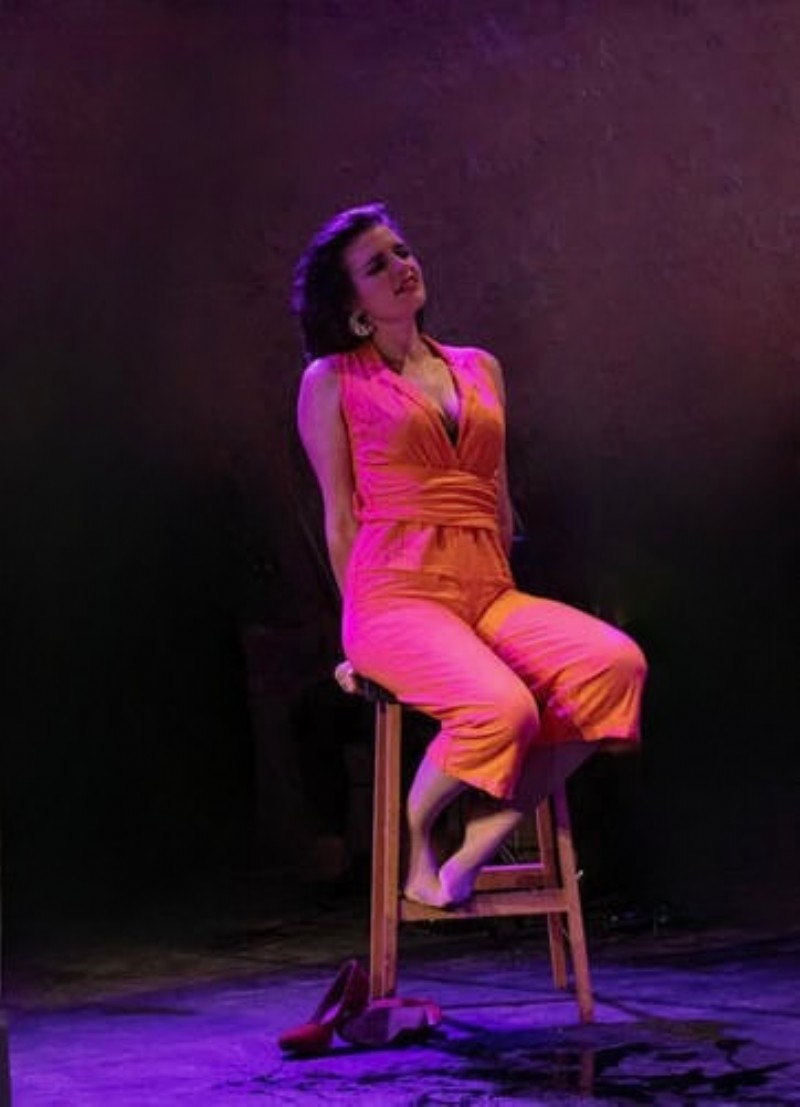 'Marcio da Silva’s Ensemble OrQuesta has done Poppea before. Indeed, I reviewed a performance at The Cockpit in February 2019 which impressed me very much – with Helen May as a splendid Nero. In this production.. she sings the title role and is even better as the lascivious and ambitious courtesan – her duets with Julia Portela Pinon as Nero are as close to deserving an 18 rating as any opera staging I have seen. The two of them provide a blend of voices that is well matched to the sometimes complex music and never better than when they sing the final pur ti miro duet.' ★★★★★ Owen Davies, Plays to See, 28.07.22 (2022)

'Subject to Love’s machinations, politically ambitious Poppea, played beautifully by soprano Helen May, catches the eye of the nefarious Emperor Nerone.. Despite their questionable motivations, the chemistry between Poppea and Nerone is palpable, professing their love with a blistering eroticism from which it is impossible to look away.' ★★★★ Rachel Wood, A Young(ish) Perspective. 28.07.22 (2022)

'A shout-out must go to Helen May (Climene), whom I’ve seen several times before..as a powerful Amastre in Cavalli's Xerse and as a cheekily exuberant Valletto in Monteverdi’s Poppea. She’s a hugely expressive singer, with velvety rich tones and the ability to convey the raw vulnerability of her character. That’s why she impressed me so much as Amastre, and her intensity worked equally well here, making Climene the character who interested me most.' **** ​​The Idle Woman Blog, 09/06/21 (2021)

Leading the first of two casts was Helen May, a controlling but vulnerable Alcina, who despairingly trashed her desk during 'Ah! mio cor'. ​Open, vibrant and powerful, May's voice is not a conventional 'early music' instrument, but she can fine it down to a whisper ​and her singing carries a strong dramatic charge.' **** Yehuda Shapiro, Opera Magazine, November 2021. (2021)

'Special guest soprano, Helen May, sang the solos throughout the work with clarity and expression.' Anthony Gilsenan, Sussex Express, November 2021. (2021)

'As Calisto, Helen May excels. Despite the comic chaos that sometimes surrounds her, she keeps the tragic heart of the opera beating with admirable passion'. La Calisto, Cockpit Theatre, January/February 2020. **** Plays to See. ' (2020)

'Vocally, all eleven singers impressed, as they did in their acting ability. It would be invidious to pick out specific singers in what was clearly a collaborative enterprise, but Helen May as Calisto.... deserve(s) special mention for (her) singing and acting ability.' La Calisto, Cockpit Theatre, January/February 2020. Early Music Reviews. (2020)

'As Nerone and Poppea, Helen May and Kathleen Nic Dhiarmada are superb. It is a real triumph to conjure up a passionate affair out of 400 year old words and music... May nicely catches the difficult balance between autocratic emperor and lovestruck suitor and, in a role that would probably have originally been sung by a castrato, she makes a convincing male hero.. The famous final duet between the two of them is spell binding.' Nerone, L'Incoronazione di Poppea, Ensemble Orquesta, Cockpit Theatre. Plays to See, February 2019. (2019)

Haydn Nelson Mass: ‘This piece is brimming with delicious chorus numbers and some true highlights for soprano soloist. Helen May does a supreme job with the soprano role.' Art scene in Wales, March 2019. (2019)

'It’s difficult to pinpoint a standout performance as every person involved demonstrated a high level of vocal and acting skills. However, the scenes and duets between Poppea and Nerone must be mentioned for their intensity and passion, excellently delivered by Kathleen Nic Dhiarmada and Helen May'. Nerone, L'Incoronazione di Poppea, Ensemble Orquesta, Cockpit Theatre. thespyinthestalls.com, January 2019. (2019)

'The soloists were superb... The Crucifixus and O Salutaris were sung by soprano Helen May beautifully and faultlessly...' Rossini's Petite Messe Solenelle, Lark Reviews, July 2019. (2019)

'…the ever-impressive Helen May. May drew out the disguised princess’s anger, shame and angst to perfection. …She blazes out among the sober Persians…' Amastre, Xerse, Ensemble OrQuesta, Grimeborn Opera Festival, August 2018. The Idle Woman Blog, September 2018. (2018)

It's hard to single anyone out, but Helen May's Despina was outstanding... A name to watch.' Despina, Cosi fan tutte, Woodhouse Opera Festival. Surrey Gazette, September 2018. (2018)

'…. there was some impressive singing, notably from Helen May (Diane) ….. demonstrating excellent fluidity in (her) ornaments, and .. having the rare ability to sing a proper trill…' Diane, Hippolyte et Aricie, Woodhouse Opera/Ensemble OrQuesta. Early Music Reviews, July 2017. (2017)

'May, whose passionate acting leading up to the seduction scene with Damigella (Conner) is more than credible and convincing.. the almost acrobatic dance sequences among the lovers, employed throughout the opera, is also especially captivating.' Valletto, l’Incoronazione di Poppea, Hampstead Garden Opera, May 2017. Plays To See, June 2017. (2017)

'Other singers that I liked from this cast were Ashley Adams, Phénice, Helen May, La Glorie/Mélisse, John Holland-Avery, Ubalde, and Matthew Morgan stepping aside from conducting to sing the role of Un Amant from on high.' Andrew Benson-Wilson, Early Music Reviews, 15/08/2017 (2017)

'Soprano Helen May filled the building with richly glowing tone, the top of the voice thrilling as it floated above the choir.' Dr Brian Hick, Lark Reviews, 05/11/2017 (2017)

'The audience will be able to welcome back the beautiful soprano voice of Helen May to sing with the choir..' Christopher Cormak, Rye News, 26/10/2017 (2017)

Helen is a lyric soprano recognised for the 'alluring' quality of her vocal tone, her 'arresting stage presence', and the intensity and conviction of her dramatic characterisation -'... awesomely dramatic ... real vulnerability as well as astonishing power.'

Helen holds a Master's in Vocal Performance with Distinction from the Royal Academy of Music where she was awarded a DipRAM for an outstanding final recital. She studied on the prestigious Preparatory Opera Course under the tutelage of Nuccia Focile, Iain Ledingham, and Philip Sunderland. Her studies were supported by the William Gibbs Trust and the Josephine Baker Trust.

​Helen has benefitted from public masterclasses with renowned singers such as Nelly Miricioiu, Toby Spence, and Isobel Buchanan; she continues to receive private coaching with Nuccia Focile and Marcio da Silva.

Helen's undergraduate studies in music took place at Cardiff University, where she held the David Lloyd Vocal Scholarship, and was awarded the Geraint Evans Prize for outstanding recital performance. Helen is an alumna of Wells Cathedral School, one of the UK's five specialist music schools, where she was awarded a sixth-form place as a 'Special Provisions' musician.

As a recitalist Helen was selected at the Royal Academy to join the Academy Voices, performing in a series of concerts under the auspices of the 'Transcending Borders' recital series at the Italian Cultural Institute, participating in an Austrian recital [II] and an Italian recital [VII]. Helen has also performed with a number of renowned chamber ensembles for competitions, BBC broadcasts, CD recordings, and concerts, in the UK and abroad. This season, Helen looks forward to a series of recitals with accompanist Lysianne Chen.

Any message that you send here will be checked by Audition Oracle for suitability (to filter out spam), and then forwarded to Helen May.